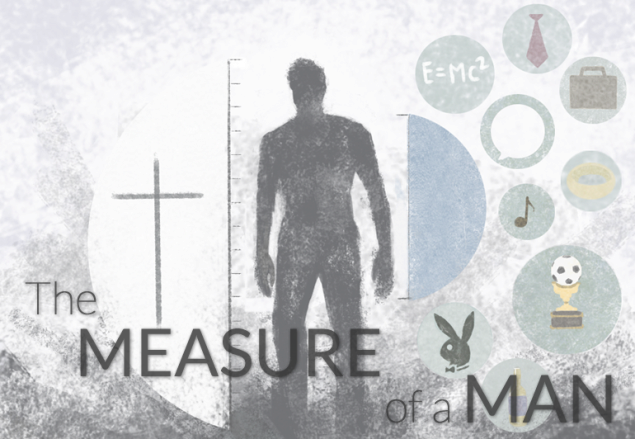 What does it really mean to be a man?

Welcome to a new series.

And by this blog title, we do not refer to the physical measures of a man. We are not talking metric and imperial units here. Professional athletes do not get a free pass. We are asking one question: What is a real man? What would be the increments on the measuring stick that sizes up a real man?

A quick disclaimer to all the women reading this: please do not feel undervalued. Yes, this series is directed at men. But a massive reason behind that is because of one thing: I am convinced that one of the biggest problems in the world is our men. However, I take it that many of the points I will make are valuable for both genders. So feel welcome.

And if you are game, keep reading.

Ultimately, the measure of all men is Jesus Christ. This is the ultimate premise behind every post in this series. Jesus Christ is the standard. The straps of his sandles I, and every man that has or ever will be, are unworthy to untie. And he came to set every man and woman free from his and her failures and fallings short. Therefore, we look to Jesus.

It is fitting, therefore, that we are going to work by an acrostic word. STRAP. Each letter stands for something that I characterise as being a true hallmark of a real man. And to do that – we are going to privilege the voice of men. And I’m not just talking males. From now on, when we refer to a man, we are talking about a man. A real man.

Another quick disclaimer: I by no means consider myself a model of any of these qualities. Hear this. It is precisely as a result of my own failure and frustration that I was forced to consider what it takes to be a real man. So. Disclaimer over. Let’s get into it.

Time to man up.

WHERE A MAN STANDS

A real man must be willing to live for what he believes, and die for it

Where a man stands.

Men. Do not be misled into thinking where you stand is a passive activity. It is a very active role. An extremely active role. To maintain right standing, a man must consistently push back against the impulses that would drive him in the other direction.

I once heard someone say that life is a river, not a lake. It is spot on. If we are not careful, and if we are not keeping watch, the current and the flow of this world will drag us downstream. We learn something crucial by this: in order to maintain your stance, there must be a constant moving against opposing forces. The battle must not be belittled.

A man must not be swayed by a crowd. A man must stand by his convictions when the whole world is screaming at him to move. A real man is unmoved by opposing forces. A real man stiff-arms fluffy triviality as a way of life, and embraces a life marked by a ferocious urgency towards everything worthy. This is our first measure of man.

Time for some examples.

This man stood by his convictions not just in moments of comfort and convenience. No, it was in a time of extreme controversy and challenge where he was not found shrinking away. He stood up. He stood up to the challenge. And history would see him die for it.

The result of his life is clear – evident in that I hardly even need to explain his life to you. Whilst not every aspect of his life was perfect, nor exemplary of a real man, one aspect cannot be disputed: when the current of the world was smashing against him and screaming at him to move, to compromise his convictions, he pushed back.

“Silence in the face of evil is itself evil: God will not hold us guiltless. Not to speak is to speak. Not to act is to act.”

A man amongst boys. If anyone personifies the quote above, which he himself penned, it is Dietrich. With the Nazi movement gaining momentum, the convictions and the climate of Germany was changing in devastating fashion. And devastating it was.

Many were swept downstream.

Hermann Gruner, German pastor at the time, said that “Hitler is the way of the Spirit and the will of God for the German people.” One pastor was even stronger in his wording, simply stating that “Christ has come to us through Adolf Hitler.” Almost incomprehensible stuff to our historically informed and advanced thinking. It is very sad. But it is true. Many of the German people bought into what Hitler was building towards.

He stood firm to the end.

“If anyone would come after me, let him deny himself and take up his cross and follow me”

We notice a common theme for men who stand for their convictions. They all died. Martin Luther King Jr. was shot for his convictions. Dietrich Bonhoeffer was hung. And this should not be unusual. Because the very God they follow said it would happen.

If you want to be a follower of Jesus, we must deny ourselves. Push against the passions of the flesh that would render us useless for God’s work. We must take up our cross. Join the battle for souls not by killing, but by dieing for others. And we must follow Jesus.

Jesus preached it. And then he lived it. Jesus was nailed to a cross where he died. And with all the forces of hell literally hammering down on him, Jesus stood firm. He was tested and he came out triumphant. Death could not hold him. Check Galatians 2:20.

All of these men stood for the glory and the absolute holiness of God. It is what drove Martin Luther King Jr. to shout “My eyes have seen the coming of the glory of the Lord!” It is how Bonhoeffer was able to write that “The church has only one altar, the altar of the Almighty … before which all creatures must kneel.” And it was how Jesus, with blood pouring down his face, was able to say “not my will, but thine be done.”

What do you stand for?

A CONCLUSION OF SORTS

Here is the deal.

Jesus calls us to come and stand with him wherever we are.

Got a stance on purity? Have your feet firmly in the responsibility and care of a family? Are you a male role model for other younger guys? Have a conviction around work ethic? Believe in the word of God and his call to love others to the point of death?

Fight against the traps of sex. Work hard to feed and nurture your family. Be careful about how you live your life as one that is a role model. Work hard for your employer. Love God and love others with everything you have got. And then pray for your shortcomings in every area I have just mentioned. They are bound to happen.

But you are invited. Stand as a man in the face of this generation.

26 thoughts on “The Measure of a Man”

Check out my latest venture!

Join the team on Strava